Edith Cavell was a British nurse who had the courage to save the lives of soldiers on both sides of WWI without discrimination. The consequences she faced for this were fatal and cost the young women her life. She was executed on October 12th, 1915 for war crimes.

The punishment definitely doesn’t seem to fit the crime and my goal is to tell the entire story of Edith Cavell and the motivations behind her actions. Edith Cavell worked full time running a nursing school, three hospitals and many other projects including public speaking four times a week lecturing nurses and doctors alike. She was well respected and took her duties seriously; moreover, when World War One broke out in 1914, Edith rushed back to work ending her vacation in order to be of assistance to those in need.

Edith Cavell’s death shocked many and according to several accounts was a big reason public opinion swayed against the Germans. Cavell’s death inspired men to enlist and played a factor into why many in the United States wanted to engage in the war.

Edith Cavell was born on December 4th, 1865 to Reverend Frederick Cavell and his wife Louisa Sophia Warming. She grew up in a small village called Swardeston near what is known as Norfolk with her three siblings named Florence, Mary, and John. Edith would grow up being educated in several boarding schools throughout Clevedon, Somerset and Peterborough after attending Norwich High School for Girls closer to her home.

Ms. Cavell eventually would work as a governess in Belgium but would have to leave that behind when her father became severally ill. She went home to care for him. After some time Edith joined training at The Royal London Hospital in Whitechapel. She did not always show herself to be the most promising of students but learned adequately and developed her skills until they were impressive. After years of training and doing all sorts of duties in hospitals throughout the United Kingdom she was invited to be a matron at the First Nursing School in Belgium. It was here she would truly shine. Edith was an able teacher who taught her students well. The Imperial War Museum reports that she led quite an eventful day-to-day life for a young woman of the time period.

“Edith was born in the village of Swardeston, Norfolk. She was the daughter of a rector and worked as a governess in Belgium, before training to be a nurse in London. She worked in hospitals in Shoreditch, Kings Cross and Manchester and then accepted a position in Brussels as Matron in Belgium’s first training hospital and school for nurses. There was no established nursing profession in Belgium at the time of Edith’s appointment, and her pioneering work led her to be considered the founder of modern nursing education in that country. She was in Norfolk visiting her mother when the First World War broke out in 1914. On hearing of the threat to Belgium, from the advancing German troops, she felt it was her duty to return to Brussels.”

Despite the qualms and fear of getting caught up in the war from those closest to her, Edith did return to Belgium. She had a desire to heal others from a young age and this was a time when many would need medical assistance. She treated enemy German soldiers and Allies alike. She just wanted to help whomever needed care in such a horrendous and violent time for millions of people being caught up in harsh wartime realities.

[Edith Cavell and probationers at the Brussels Nursing School, Belgium]

While in Belgium her hospital was converted to a Red Cross hospital with the goal to serve both soldiers from Brussels and Germany. Edith Cavell made it clear that it didn’t matter who were injured because all would receive the best medical care staff could provide; however, it didn’t take long before the British nurse began to hide and funnel out Allied soldiers to the Netherlands that had remained out of the war at this point. The following excerpt is from a biography called Edith Cavell’s Life & Legacy. It describes the infliction of a moral dilemma against her duties as a member of the neutral Red Cross. By all accounts it seemed she felt a greater duty to her fellow countrymen and the soldiers she cared for at the hospital even at the cost of her own life.

“By August 3rd 1914, she was back in Brussels dispatching the Dutch and German nurses home and impressing on the others that their first duty was to care for the wounded irrespective of nationality. The clinic became a Red Cross Hospital, German soldiers receiving the same attention as Belgian. When Brussels fell, the Germans commandeered the Royal Palace for their own wounded and 60 English nurses were sent home. Edith Cavell and her chief assistant, Miss Wilkins remained.

Edith also faced a moral dilemma. As a ‘protected’ member of the Red Cross, she should have remained aloof. She was prepared to sacrifice her conscience for the sake of her fellow men. To her, the protection, the concealment and the smuggling away of hunted men was as humanitarian an act as the tending of the sick and wounded. Edith was prepared to face what she understood to be the just consequences.”

It would not be long though before Edith along with many others managed to allow over two hundred allies get to safety. This was done fully in the knowledge if she should get caught there would be fatal consequences for those actions. She kept going anyways sticking to what she felt right. It would not be long before she faced those consequences.

Edith Cavell was arrested and interrogated on August 3rd, 1915 for harboring allied soldiers. The nurse was sent to Saint-Gilles prison where she was prosecuted for aiding British and French soldiers. Edith spent the last ten weeks of her life in imprisoned. She openly admitted to the acts she had done after being told that her colleagues had made confessions revealing everything that had transpired in harboring the men. The nurse believed them and admitted guilt to all the charges being careful not to incriminate anyone but herself.  In the biography Edith Cavell’s Life & Legacy, it is revealed that she may have confessed in order to protect others even at her own peril and demise.

“During her interrogation she was told that the other prisoners had confessed. In her naivete she believed them and revealed everything. Many people think that Edith ‘shopped’ her compatriots simply because, like George Washington, she could ‘never tell a lie’. This was far too simplistic an explanation. Edith was willing to abuse her position in the Red Cross to help her fellow countrymen in need. She would have equally protected her colleagues at the risk of compromising her own conscience even though this would have been painful and contrary to her upbringing.

She was trained to protect life, even at the risk of her own. “Had I not helped”, she said, “they would have been shot”. The explanation is that Edith simply trusted her captors, was glad to make a clean breast of it and willingly condemned herself by freely admitting at her trial that she had “successfully conducted allied soldiers to the enemy of the German people”. Herein lay her ‘guilt’, and this was a capital offence under the German penal code. She was guilty, so they must shoot her.”

The sentencing was handed down swiftly and without mercy. The punishment was going to be death. On the morning of October 12, 1915, Edith was shot by a firing squad for “war crimes”. This outraged the world for she was just trying to help those in need. Please read the letter below for an eyewitness account from Reverend H. Stirling who was present the evening prior and day of the nurse’s untimely death through execution.

The following is an eyewitness account by Reverend H. Stirling Gahan on the Execution of Edith Cavell in 1915 after being found guilty of war crimes and treason.

On Monday evening, October 11th, I was admitted by special passport from the German authorities to the prison of St. Gilles, where Miss Edith Cavell had been confined for ten weeks. The final sentence had been given early that afternoon.

To my astonishment and relief I found my friend perfectly calm and resigned. But this could not lessen the tenderness and intensity of feeling on either part during that last interview of almost an hour. Her first words to me were upon a matter concerning herself personally, but the solemn asseveration which accompanied them was made expressedly in the light of God and eternity.

She then added that she wished all her friends to know that she willingly gave her life for her country, and said: “I have no fear nor shrinking; I have seen death so often that it is not strange or fearful to me.”

She further said: “I thank God for this ten weeks’ quiet before the end.” “Life has always been hurried and full of difficulty.” “This time of rest has been a great mercy.” “They have all been very kind to me here. But this I would say, standing as I do in view of God and eternity, I realize that patriotism is not enough. I must have no hatred or bitterness towards any one.”

We partook of the Holy Communion together, and she received the Gospel message of consolation with all her heart. At the close of the little service I began to repeat the words, “Abide with me,” and she joined softly in the end.

We sat quietly talking until it was time for me to go. She gave me parting messages for relations and friends. She spoke of her soul’s needs at the moment and she received the assurance of God’s Word as only the Christian can do.

Then I said “Good-by,” and she smiled and said, “We shall meet again.”

The German military chaplain was with her at the end and afterwards gave her Christian burial. He told me: “She was brave and bright to the last. She professed her Christian faith and that she was glad to die for her country.” “She died like a heroine.” 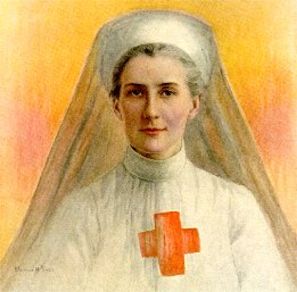 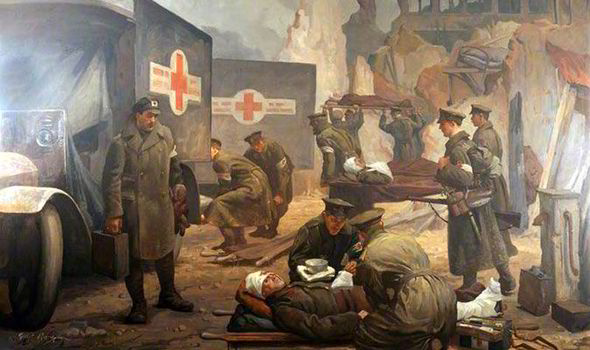