Posted on March 24, 2021 by The Chronicles of History 6 comments

Today in History on March 24th, 1603: Queen Elizabeth I of England died at Richmond Palace in London. The last days of Elizabeth saw her in a great depression due to the death of Catherine Carey, Countess of Nottingham, the niece of her cousin and close friend Lady Knollys. This was a massive blow to Queen Elizabeth’s heart, leaving her grief stricken.

For weeks after Catherine’s death, the queen fell ill and was often restless unable to sleep, sitting on her cushioned seats motionless for hours. When Robert Cecil told her that she must go to bed, she snapped: “Must is not a word to use to princes, little man.” She became even sicker, dying on March 24th in the late hours shortly after 2am. A few hours later, Cecil and the council set their plans in motion and proclaimed James King of England. Queen Elizabeth was buried at Westminster Abbey in a tomb shared with her half-sister Mary I of England. The Latin inscription on their tomb, “Regno consortes & urna, hic obdormimus Elizabetha et Maria sorores, in spe resurrectionis”,  translates to “Consorts in realm and tomb, here we sleep, Elizabeth and Mary, sisters, in hope of resurrection”.

In today’s post and in the memory of a great English queen, whose reign brought England into a “Golden Age”,  I am sharing one of her very last speeches she gave to parliament just a couple years prior to her death, In November of 1601. The speech is considered by many to be Elizabeth’s great “Farewell Speech” and her last time speaking to an audience. 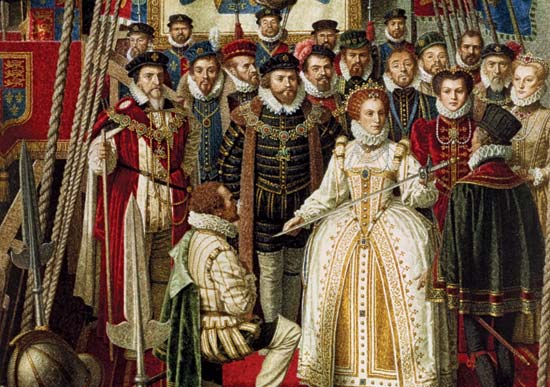 On the afternoon of 30 November, 140 Members of the Commons, 141 with the Speaker, crowded into the Presence Chamber and fell on their knees as their sovereign entered the room. She was sixty-eight and in excellent health, but perhaps some guessed that this would be her last Parliament. She had come to deliver what should have been a rasping harangue on finance, but she turned it into ‘golden words’, which were to be reprinted time and time again up to the eighteenth century, whenever England was in danger, as the Golden Speech of Queen Elizabeth.

Several versions survive, including a printed pamphlet which it is thought Elizabeth may have checked and corrected, but its text is inferior to the moving account by the diarist, Hayward Townshend, who was among those kneeling before her that November afternoon in the Presence Chamber. The speech is as follows:

We have heard your declaration and perceive your care of our estate. I do assure you there is no prince that loves his subjects better, or whose love can countervail our love. There is no jewel, be it of never so rich a price, which I set before this jewel: I mean your love. For I do esteem it more than any treasure or riches; for that we know how to prize, but love and thanks I count invaluable. And, though God hath raised me high, yet this I count the glory of my Crown, that I have reigned with your love … I do not so much rejoice that God hath made me to be a Queen; as to be a Queen over so thankful a people.

Therefore I have cause to wish nothing more than to content the subject and that is a duty which I owe. Neither do I desire to live longer days than I may see your prosperity and that is my only desire. And as I am that person still yet, under God, hath delivered you and so I trust by the power of God that I shall be his instrument to preserve you from every peril, dishonour, shame, tyranny and oppression, partly by means of your intended helps which we take very acceptably because it manifesteth the largeness of your good loves and loyalties unto your sovereign. Of myself I must say this: I never was any greedy, scraping grasper, nor a strait fast-holding Prince, nor yet a waster. My heart was never set on any worldly goods. What you bestow on me, I will not hoard it up, but bestow on you again.

Therefore render unto them I beseech you Mr Speaker, such thanks as you imagine my heart yieldeth, but my tongue cannot express. Mr Speaker, I would wish you and the rest to stand up for I shall yet trouble you with longer speech. Mr Speaker, you give me thanks but I doubt me I have greater cause to give you thanks, than you me, and I charge you to thank them of the Lower House from me. For had I not received a knowledge from you, I might have fallen into the lapse of an error, only for lack of true information.

Since I was Queen, yet did I never put my pen to any grant, but that upon pretext and semblance made unto me, it was both good and beneficial to the subject in general though a private profit to some of my ancient servants, who had deserved well at my hands. But the contrary being found by experience, I am exceedingly beholden to such subjects as would move the same at first. And I am not so simple to suppose but that there be some of the Lower House whom these grievances never touched. I think they spake out of zeal to their countries and not out of spleen or malevolent affection as being parties grieved.

That my grants should be grievous to my people and oppressions to be privileged under colour of our patents, our kingly dignity shall not suffer it. Yea, when I heard it, I could give no rest unto my thoughts until I had reformed it. Shall they, think you, escape unpunished that have oppressed you, and have been respectless of their duty and regardless our honour? No, I assure you, Mr Speaker, were it not more for conscience’ sake than for any glory or increase of love that I desire, these errors, troubles, vexations and oppressions done by these varlets and lewd persons not worthy of the name of subjects should not escape without condign punishment. But I perceive they dealt with me like physicians who, ministering a drug, make it more acceptable by giving it a good aromatical savour, or when they give pills do gild them all over.

I have ever used to set the Last Judgement Day before mine eyes and so to rule as I shall be judged to answer before a higher judge, and now if my kingly bounties have been abused and my grants turned to the hurt of my people contrary to my will and meaning, and if any in authority under me have neglected or perverted what I have committed to them, I hope God will not lay their culps and offenses in my charge.

I know the title of a King is a glorious title, but assure yourself that the shining glory of princely authority hath not so dazzled the eyes of our understanding, but that we well know and remember that we also are to yield an account of our actions before the great judge. To be a king and wear a crown is a thing more glorious to them that see it than it is pleasant to them that bear it. For myself I was never so much enticed with the glorious name of a King or royal authority of a Queen as delighted that God hath made me his instrument to maintain his truth and glory and to defend his kingdom as I said from peril, dishonour, tyranny and oppression.

There will never Queen sit in my seat with more zeal to my country, care to my subjects and that will sooner with willingness venture her life for your good and safety than myself. For it is my desire to live nor reign no longer than my life and reign shall be for your good. And though you have had, and may have, many princes more mighty and wise sitting in this seat, yet you never had nor shall have, any that will be more careful and loving. ‘For I, oh Lord, what am I, whom practices and perils past should not fear? Or what can I do? That I should speak for any glory, God forbid.’ And turning to the Speaker and her councilors she said, ‘And I pray to you Mr Comptroller, Mr Secretary and you of my Council, that before these gentlemen go into their countries, you bring them all to kiss my hand.’

This text is part of the Internet Modern History Sourcebook. The Sourcebook is a collection of public domain and copy-permitted texts. Permission is granted for electronic copying, distribution in print form for educational purposes and personal use. If you do reduplicate the document, indicate the source; otherwise no permissions granted.

The New York Times bestseller from Margaret George—a captivating novel about history’s most enthralling queen, the legendary Elizabeth I.

England’s greatest monarch has baffled and intrigued the world for centuries. But what was the Virgin Queen really like? Lettice Knollys—Elizabeth’s flame-haired, look-alike coussin—thinks she knows all too well. Elizabeth’s rival for the love of Robert Dudley, Earl of Leicester, and mother to the Earl of Essex, Lettice has been intertwined with Elizabeth since childhood.

This is a story of two women of fierce intellect and desire, one trying to protect her country and throne, the other trying to regain power and position for her family. Their rivalry, and its ensuing drama, soon involves everyone close to Elizabeth, from the famed courtiers who enriched the crown to the legendary poets and playwrights who paid homage to it with their works.

Filled with intimate portraits of the personalities who made the Elizabethan age great—Shakespeare, Marlowe, Dudley, Raleigh, Drake—Elizabeth I provides an unforgettable glimpse of a woman who considered herself married to her people. A queen who ruled as much from the heart as from the head.

PLEASE CLICK HERE TO GET A COPY OF THE BOOK!