I was very excited when my copy of Unremembered: Tales of the Nearly Famous & the Not Quite Forgotten written by history author Ken Zurski arrived in the mail last week. This book was really interesting and didn’t disappoint at all as I dived into the stories!

As many readers already know, I am a huge fan of Zurksi’s work. He is an intelligent writer with a knack of finding the most out of the ordinary facts about any given event taking place in history. The Historical Diaries has been honored to have him appear on the blog as a guest writer. I follow his blog Unremembered History and just knew the book could be a great read. Zurski’s latest book is the first of his titles I have read and it definitely will not be the last one. The book receives a 5 out of 5 star review for me! 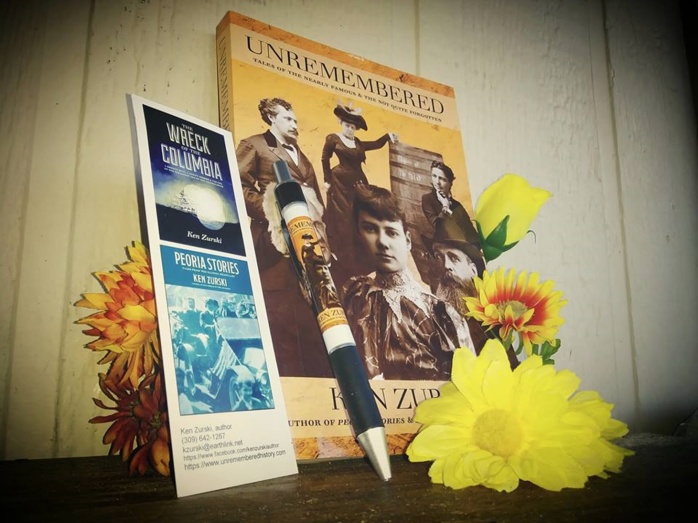 [Photo by Samantha James – author of The Historical Diaries]

The book begins by weaving a terrifying tale of a horrendous night when a ship literally catches on fire and sinks off the coast near Long Island, NY. To make matters even worse it is the middle of winter on a very cold night when this occurs. The waters are below freezing. Impossible to survive such conditions for the ship’s occupants. These chilling lines from the book really stuck with me as they described the tragic loss of one man.

“Stephen Manchester, the pilot of the ship, was one of the three rescued. His story was similar to the other survivors. Once he realized there was no choice but to jump, he landed first on a “stage or raft” – likely just a floating board – and managed to stay mostly dry. From there he hopped on a floating bale. Another man managed to mount the bale too, but he had been soaked and the chill eventually sucked the life out of him. Manchester said he watched the man die and drift off.”

Ken Zurski’s book really paints a picture in a clear and interesting way of the events that took place during the wreck. Every word is compelling and keeps you interested. I also loved how each chapter all relate back to this one singular moment in a time that really changed many lives forever. Those affected by the fire all have stories that need to be told and Zurski somehow managed to compile them all concise and easy manner for an enjoyable book that had me entertained the entire time. I became quite absorbed into the tales these people lived through and their feelings on what had happened.

The most compelling person in the book was Annie Taylor, a woman from Michigan who actually jumped down Niagara Falls and lived to caution everyone against every trying to do something like that. Taylor’s motivation for doing such a dangerous and suicidal stunt seemed to be for making headlines and earning money. The woman had been recently widowed and struggling without a husband. She deeply resented the fact as a woman she had to rely on the support of a man. She decided to go down the Niagara Falls in a custom made barrel. Zurski recounts what happened after Taylor was found at the bottom of the falls still alive thankfully despite the very perilous publicity stunt.

‘When rescuers reached the barrel below the Falls, Annie Taylor was still inside, awake and rattled but otherwise fine.The doctors in attendance upon her said, that, though she was somewhat hysterical, her condition in not at all serious … She had a gash upon her forehead along with a few bruises, but that was all … Physically Taylor had been left intact, but emotionally she was not… suddenly the first person to leap over Niagara Falls in a barrel was preaching against others from copying it. “If it was with my dying breath,” she told the press,”I would caution anyone against attempting the feat.”

Ken Zurski, author of The Wreck of the Columbia and Peoria Stories, provides a fascinating collection of once famous people and events that are now all but forgotten by time. Using a backdrop of schemes and discoveries, adventures and tragedies, Zurski weaves these figures and the events that shaped them into a narrative that reveals history’s many coincidences, connections, and correlations.

We tumble over Niagara Falls in a barrel, soar on the first transcontinental machine-powered flight, and founder aboard a burning steamboat. From an adventurous young woman circumnavigating the globe to a self-absorbed eccentric running for President of the United States, Unremembered brings back these lost stories and souls for a new generation to discover.

5 thoughts on “Book Review | Unremembered: Tales of the Nearly Famous & the Not Quite Forgotten”