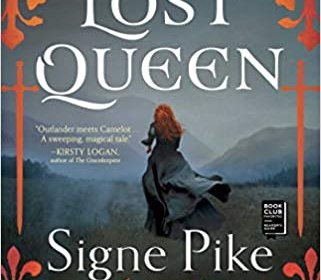 The Lost Queen by Signe Pike was just the historical fiction novel my mind needed to read. The whole story is absolutely entertaining from start to finish. In today’s post I will go over my thoughts on the amazing characters, plot, and setting. I was very impressed with the amount of research and history that went into this in order bringing such a story to life.

Leave your thoughts on the book if you have read it already and what other books would you recommend reading for those interest in the historical fiction genre? Thank you for reading today’s post and book review! Leave you thoughts in the comments below!

I was thrilled to read The Lost Queen by Signe Pike because honestly; I have had some bad reads as of late. This book is a welcomed refreshment of pure reading bliss. The novel carried me into a journey where life is much harder. Pike weaves a story surrounding Languoreth, princess of Cadzow and her journey into a world of arranged marriage, a religious war, tyrannical kings, and gender bias.
Languoreth and her twin brother are absolutely adorable. They are so endearing as siblings surviving a chaotic world together. Their relationship for me is what defines loyalty, friendship, and honor. Pike managed to make me fall in love with almost all the characters in the story such as King Morken and Cathan, the wisdom keeper.

In the novel, there is a lot of religious upheaval as Christians move in on the old ways in an attempt to extinguish the old religion entirely. I found this aspect of the plot to be extremely well done. The author alludes to a lot of the details and masterly shows the pivotal moments to us readers. This was greatly appreciated because it provided me with a clear picture that was entertaining and didn’t leave me feeling bored enough to start skimming sentences. It wasn’t overly done or pretentious. I was filled with the same outrage, heartbreak, and anger the people of Briton were feeling at the time against evil men such as Mungo and the ruthless High King, Languoreth’s future father-in-law. The characters are so uniquely vivid and felt so real to me throughout the story.

Romance is something I always enjoy in any story and love to see something heartwarming; luckily, this book had plenty of it! From an affair with a warrior following Emrys Pendragon that results in a baby to a brooding husband that is more kind-hearted than first impressions reveal. There is plenty of juicy emotional feels stacked into a beautifully set novel that really just sucks you right into the story.

The characters are what really made this book so appealing; however, the history, setting, and research into structuring this novel allowed me to form pictures in my head that smoothly kept up with the story as I went through it.

This book receives a 5 out of 5-star review from me. I highly recommend checking it out especially if historical fiction is something you enjoy. This book was just a delight!

“Outlander meets Camelot” (Kirsty Logan, author of The Gracekeepers) in the first book of an exciting historical trilogy that reveals the untold story of Languoreth—a powerful and, until now, tragically forgotten queen of sixth-century Scotland—twin sister of the man who inspired the legendary character of Merlin.

Intelligent, passionate, rebellious, and brave, Languoreth is the unforgettable heroine of The Lost Queen, a tale of conflicted loves and survival set against the cinematic backdrop of ancient Scotland, a magical land of myths and superstition inspired by the beauty of the natural world. One of the most powerful early medieval queens in British history, Languoreth ruled at a time of enormous disruption and bloodshed, when the burgeoning forces of Christianity threatened to obliterate the ancient pagan beliefs and change her way of life forever.

Together with her twin brother Lailoken, a warrior and druid known to history as Merlin, Languoreth is catapulted into a world of danger and violence. When a war brings the hero Emrys Pendragon, to their door, Languoreth collides with the handsome warrior Maelgwn. Their passionate connection is forged by enchantment, but Languoreth is promised in marriage to Rhydderch, son of the High King who is sympathetic to the followers of Christianity. As Rhydderch’s wife, Languoreth must assume her duty to fight for the preservation of the Old Way, her kingdom, and all she holds dear.

“Moving, thrilling, and ultimately spellbinding” (BookPage), The Lost Queen brings this remarkable woman to life—rescuing her from obscurity, and reaffirming her place at the center of the most enduring legends of all time. “Moving, thrilling, and ultimately spellbinding, The Lost Queen is perfect for readers of historical fiction like The Clan of the Cave Bear and Wolf Hall, and for lovers of fantasy like Outlander and The Mists of Avalon” (BookPage).