The strongest quality Blackbeard had were his ability to terrify others. It was a skill that allowed him to be a successful pirate without having to spill a lot of blood. He had a long black beard that would cover his whole face giving him a very menacing appearance. He is known for being one of the most notorious and deadly pirates of his time.

The most interesting fact about Blackbeard stems from the fact he never actually killed anyone as far as the records show. He never needed to. In today’s post we are going to discuss a little bit about how Blackbeard became a pirate in the first place, who he really was, and explore his time in the Americas scouring the Atlantic ocean. This post will also include a newspaper account from the Boston Newsletter. Hope you enjoy reading! 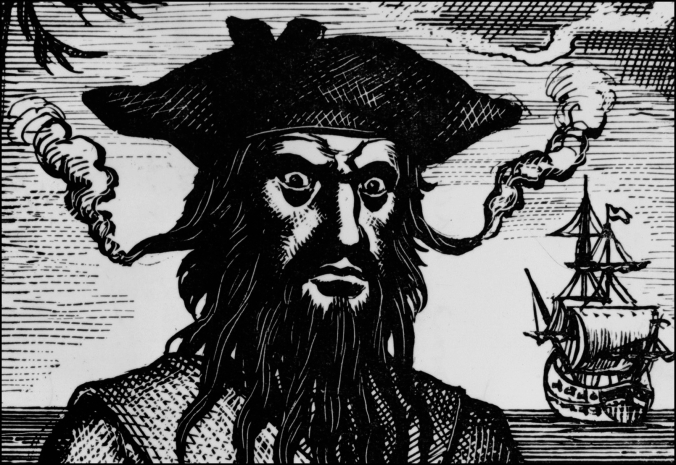 A pirate ship’s cannon fires a warning blast. The explosion rocks a nearby merchant ship. Musket balls fly. Grenades explode. A wounded helmsman staggers. He lets go of the ship’s wheel, and the ship swings around crazily. Flames flicker everywhere. Pistols fire. Pirates, screaming threats, board the merchant ship, swinging axes and cutlasses (short, curved swords). Hissing through his teeth, Blackbeard—one of the most dreaded pirates who ever lived—jumps to the deck. “

This is what many people feared while embarking on any kind of sea voyage around the Caribbean and the Atlantic Ocean in the early 18th century. Sailors, merchants, and travelers alike had to be prepared for a possible attack. The time period of 1689 through 1718 is considered somewhat of a golden age for pirates. It was a very real threat that was faced if you were traveling by ship. Precaution was the priority before such a journey; however, pirates were usually very heavily armed and able to take control of weaker vessels they spotted out in the waters.

The pirate Blackbeard had made quite a name for himself over a two-year period. He is known for being one of the most notorious pirates of his time. His crew would attack and plunder merchant ships but there is no accounts that have been verified of him actually killing anyone. He didn’t need too because of the reputation for being deadly worked enough to scare merchants.  Blackbeard’s real name is thought to be Edward Teach; although, there are some arguments on the last name. Some historians make the claim that “Teach” is not the correct spelling. They say it is in fact written as Thatch or Thache; moreover, the name is also thought to be simply an alias as a way to protect Blackbeard’s family. Pirates’ using fictitious surnames was not uncommon. They would do this so they could obtain their “fortune” and return without blemishing their families’ name. There really is not any record of the man Blackbeard was prior to him turning to piracy after being a privateer during the Spanish Succession (1701-1713). 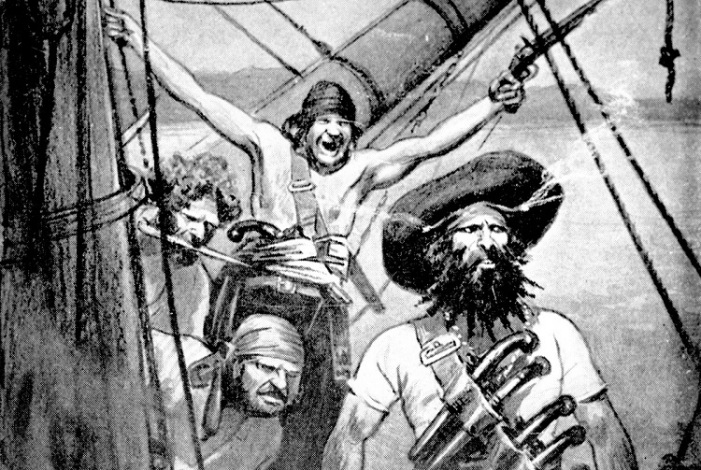 He was an Englishmen thought to be born somewhere around 1680 in one of England’s towns called Bristol. He would eventually find himself operating around the West Indies and the Americas, looting ships and stealing like any pirate captain would. Despite all the various unknowns behind Blackbeard, the man was obviously educated because he had the ability to read and write. Upon his death, several papers were found on him that supports this fact.

Blackbeard would eventually turn away from privateering and meet a pirate captain named Benjamin Hornigold. It would not take long for the two men to strike up a friendship. Blackbeard would start working under Hornigold’s command in 1716. He would sail around the American mainland from a pirate province in the West Indies. The ships they captured would typically be holding cargo ranging from things such as flour and wine to more valuable items. These include silk and gold bullion, which is gold in its raw material form. The pirates would take anything they could from the ships the looted. This would include food, ammo, weapons, and anything of use.

It would not take long before Blackbeard would become his own pirate captain. While sailing to the French island of Martinique, a large merchant vessel would be taken over by Hornigold’s men. This ship, in particular, was now in the control of Blackbeard as its captain. He would rename it Queen Anne’s Revenge. It would not be long after this that Hornigold would retire from pirating altogether by receiving the King’s pardon. The appointed governor of the Bahamas, Captain Wood Rogers, was given the power to pardon the crime of piracy. The only condition was that they changed their behavior and gave up their criminal activity.

This was a decision Hornigold made for himself; however, Blackbeard was just beginning his career and had no intention of giving up piracy.

The strongest quality Blackbeard had were his ability to terrify others. He had a long black beard that would cover his whole face giving him a very menacing appearance. He would twist his beard into braids and before he went into a fight, hemp rope would be tucked into his hair drenched in saltpeter. The long hemp ropes would slowly burn after lit providing quite an effect. The bales of smoke would rise up from Blackbeard’s face making him seem as deadly as his reputation implied he was.

The beard and smoke along with his well-known booming voice were terrifying to people he came across. The notorious pirate captain would also have tons of weapons on hand. He would have multiple pistols tied around his waist in holsters, swords, and knives hanging off his back. He literally struck fear into all who met him. Blackbeard was given the reputation of a monster during his two-year career in piracy. As stated previously he was a greatly feared pirate captain who was also highly intelligent.

Unfortunately, it wouldn’t be too long before everything caught up to Edward Teach and his life would come to a startling end, officially concluding the golden age of pirates. The Governor of Virginia named Alexander Spotswood gave orders and requested that a British Naval force operated by Lieutenant Robert Maynard to go to North Carolina and take care of the Blackbeard pirate and his crew. They were defeated November 22nd, 1718 in a battle that ensued off of Ocracoke Island. Below is a newspaper account from Boston about the death and setting the record straight on how Edward Teach Died.

ON the 12th Currant arrived here –––Humphry Johnſton in a Sloop from North Carolina, bound to Amboy who ſailed the next Day, and informs that Governour Spotwood of Virginia fitted out two Sloops, well manned with Fifty Men of His Majeſty’s Men of War lying there, and small Arms, but no great Guns, under the Command of Lieutenant Robert Maynard of His Majesty’s Ship Pearl, in pursuit of that Notorious and Arch Pirate Capt. Teach, who made his escape from Virginia, when some of his Men were taken there, which Pirate Lieutenant Maynard came up with at North Carolina,and when they came in hearing of each other,Teach called to Lieutenant Maynard and told him he was for King GEORGE, desiring him to hoift out his boat and come aboard,Maynard replayed that he designed to come aboard  as soon as he could.

Teach understanding his design, told him that if he would let him alone, he would not meddle with him; Maynard answered that it was him he wanted, and that he would have him dead or alive, else it would cost him his life;whereupon Teach called for a Glass of Wine,and swore Damnation to himself if he either took or gave Quarters: then Lieutenant Maynard told his Men that now they knew what they had to trust and could not escape the Pirates hands if they had a mind, but must either fight and kill, or be killed; Teach begun and fired several great Guns at Maynard’s sloop, which did but little damage, but Maynard rowing nearer Teach’s Sloop of Ten Guns, Teach fired some small Guns, loaded in upon Maynard, which killed six of his Men and wounded ten, upon which Lieutenant Maynard, ordered all the rest of his Men to go down in the Hould, himself, Abraham Demelt of New-York, and a third at the Helm frayed above Deck. Teach seeing so few on the Deck, laid to his Men, the Rogues were all killed except two or three, and he would go on board and kill them himself, so drawing nearer.

Maynard and Teach themselves begun the fight with their Swords, Maynard making a thrust, the point of his Sword went against Teach’s Cartridge Box, and bended it to the Hilt, Teach broke the Guard of it, and wounded Maynard’s Fingers but did not disable him,whereupon he Jumped back, threw away his Sword and fired his Pistol, which wounded Teach. Demelt struck in between them with his Sword and cut Teach’s Face pretty much; in the Interim both Companies engaged in Maynard’s Sloop, one of Maynard’s Men being a Highlander, engaged Teach with his broad Sword, who gave Teach a cut on the Neck, Teach slaying well done Lad, the Highlander reply’d, if it be not well done, I’ll do it better, with that he gave him a second stroke, which cut off his Head, laying it flat on his shoulder, Teach’s Men being about 20, and three or four Blacks were all killed in the engagement, excepting two carried to Virginia:
Teach’s body was thrown overboard. — THE DEATH OF BLACKBEARD 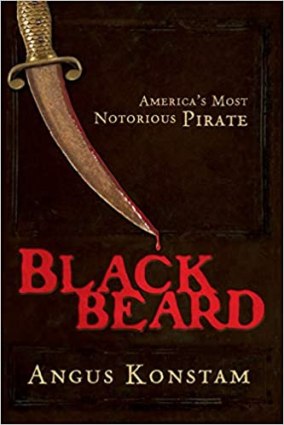 The definitive biography of history’smost fearsome and famous pirate

Of all the colorful cutthroats who scoured the seas in search of plunder during the Golden Age of Piracy in the early eighteenth century, none was more ferocious or notorious than Blackbeard. As unforgettable as his savage career was, much of Blackbeard’s life has been shrouded in mystery–until now.

Drawing on vivid descriptions of Blackbeard’s attacks from his rare surviving victims, pirate expert Angus Konstam traces Blackbeard’s career from its beginnings to his final defeat in a tremendous sea battle near his base at Ocracoke Island. Presenting dramatic accounts of the pirate’s very effective tactics and his reputation for cruelty, Konstam offers a fascinating examination of the life and business of piracy and the lure of this brutal and bloody trade.