The Assassination of Archduke Franz Ferdinand and his wife Sophie, Duchess of Hohenberg was the last straw that would set of a chain of events leading many countries to declare war and begin the first world war in history. WWI or the “Great War” had over a hundred countries involved in the conflict during its climax between 1914-1918.

In today’s post I will be sharing different eyewitness accounts of the assassination from two people that were there that day, including one of the co-conspirators of the fatal assassin whose bullets killed the royal couple. This took place on June 28th, 1914.

The Archduke Franz Ferdinand was the Heir Presumptive to the throne of Austria. This came about by some very drastic changes and death in the Archduke’s life. Ferdinand’s cousin the Crown Prince Rudolf died of apparent suicide which left Ferdinand’s father the next in line to the throne, but Karl Ludwig died of Typhoid fever. This left the Archduke next in line for the crown after his uncle King Franz Joseph I of Austria. Despite this burden, he did manage to find time for travel and personal pursuits, such as his circumnavigation of the world between 1892 and 1893. The Archduke also had an extensive military career like all those of the Habsburg line. He joined very young and by the age of fourteen had already be given the rank of Lieutenant.

Franz Ferdinand fell in love secretly to a non-royal named Countess Sophie Chotek. The Chotek family were not royals and Ferdinand wouldn’t have been allowed to marry her but he threw such a fit that it was eventually allowed. He married Sophie in July 1st, 1900. She would be given the title Duchess of Hohenberg in 1909. The royal couple had three living children throughout their fourteen marriage, two sons and one daughter. In 1908 they had a stillborn son. He was buried at Artstetten Castle, the eventual resting place for his parents the Archduke and duchess after their assassination in 1914.

Count Franz von Harrach rode on the running board of the royal car serving as a bodyguard for the Archduke. His account begins immediately after Princip fires his two shots:

“As the car quickly reversed, a thin stream of blood spurted from His Highness’s mouth onto my right check. As I was pulling out my handkerchief to wipe the blood away from his mouth, the Duchess cried out to him, ‘In Heaven’s name, what has happened to you?’ At that she slid off the seat and lay on the floor of the car, with her face between his knees.

I had no idea that she too was hit and thought she had simply fainted with fright. Then I heard His Imperial Highness say, ‘Sopherl, Sopherl, don’t die. Stay alive for the children!’

At that, I seized the Archduke by the collar of his uniform, to stop his head dropping forward and asked him if he was in great pain. He answered me quite distinctly, ‘It’s nothing!’ His face began to twist somewhat but he went on repeating, six or seven times, ever more faintly as he gradually lost consciousness, ‘It’s nothing!’ Then, after a short pause, there was a violent choking sound caused by the bleeding. It was stopped as we reached the Konak.”

Eyewitness account from the perspective of Borijove Jevtic. He was a member of the Black Hand group, a secret society who were part of the assassination of the Archduke Franz Ferdinand and his wife Sophie, Duchess of Hohenberg. There were a  total of seven assassins involved altogether. Borijove Jevtic was a co-conspirator with Gavrilo Princip. The man who fired the fatal shots ending the lives of both Ferdinand and Sophie.

Seven conspirators joined the crowd lining the Archduke’s route to City Hall. Each took a different position, ready to attack the royal car if the opportunity presented itself. The six-car procession approached one conspirator, Gabrinovic (or Cabrinovic), who threw his bomb only to see it bounce off the Archduke’s car and explode near the following car. Unhurt, the Archduke and his wife sped to the reception at City Hall. The ceremonies finished, the Royal procession amazingly retraced its steps bringing the Archduke into the range of the leader of the conspiracy, Gavrilo Princip. More amazingly, the royal car stopped right in front of Princip providing him the opportunity to fire two shots. Both bullets hit home.

Borijove Jevtic, one of the conspirators gave this eyewitness account:

“When Francis Ferdinand and his retinue drove from the station they were allowed to pass the first two conspirators. The motor cars were driving too fast to make an attempt feasible and in the crowd were many Serbians; throwing a grenade would have killed many innocent people.When the car passed Gabrinovic, the compositor, he threw his grenade. It hit the side of the car, but Francis Ferdinand with presence of mind threw himself back and was uninjured. Several officers riding in his attendance were injured.

The cars sped to the Town Hall and the rest of the conspirators did not interfere with them. After the reception in the Town Hall General Potiorek, the Austrian Commander, pleaded with Francis Ferdinand to leave the city, as it was seething with rebellion. The Archduke was persuaded to drive the shortest way out of the city and to go quickly.

The road to the maneuvers was shaped like the letter V, making a sharp turn at the bridge over the River Nilgacka [Miljacka]. Francis Ferdinand’s car could go fast enough until it reached this spot but here it was forced to slow down for the turn. Here Princip had taken his stand. As the car came abreast he stepped forward from the curb, drew his automatic pistol from his coat and fired two shots. The first struck the wife of the Archduke, the Archduchess Sofia, in the abdomen. She was an expectant mother.

The second bullet struck the Archduke close to the heart.

He uttered only one word, ‘Sofia’ — a call to his stricken wife. Then his head fell back and he collapsed. He died almost instantly.

The officers seized Princip. They beat him over the head with the flat of their swords. They knocked him down, they kicked him, scraped the skin from his neck with the edges of their swords, tortured him, all but killed him.”

I understand the account states that Sophie, Duchess of Hohenberg was believed by Princip and Jevtic to have been pregnant. I have extensively tried to confirm whether this was a true or not. I am unable but it seems highly unlikely. She was forty-six years old at the time of her death and there is absolutely nothing I can find personally that would indicate truth to this statement or some sort of explanation to why Jevtic would state that Princip murdered a pregnant expectant mother. It is a mystery to me at this point and please leave a comment if you have some information and knowledge about this because I personally would be interested in what you think as I am sure others would be too.

Drawing on unpublished letters and rare primary sources, King and Woolmans tell the true story behind the tragic romance and brutal assassination that sparked World War I

In the summer of 1914, three great empires dominated Europe: Germany, Russia, and Austria-Hungary. Four years later all had vanished in the chaos of World War I. One event precipitated the conflict, and at its hear was a tragic love story. When Austrian heir Archduke Franz Ferdinand married for love against the wishes of the emperor, he and his wife Sophie were humiliated and shunned, yet they remained devoted to each other and to their children. The two bullets fired in Sarajevo not only ended their love story, but also led to war and a century of conflict.

Set against a backdrop of glittering privilege, The Assassination of the Archduke combines royal history, touching romance, and political murder in a moving portrait of the end of an era. One hundred years after the event, it offers the startling truth behind the Sarajevo assassinations, including Serbian complicity and examines rumors of conspiracy and official negligence. Events in Sarajevo also doomed the couple’s children to lives of loss, exile, and the horrors of Nazi concentration camps, their plight echoing the horrors unleashed by their parents’ deaths. The Assassination of the Archduke resonates as a very human story of love destroyed by murder, revolution, and war.

CLICK HERE TO GET A COPY OF THE BOOK! 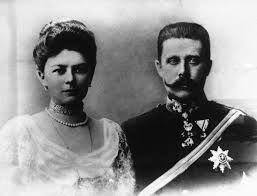 Want to have your worked shared on our blog? Come join our writing team! Just contact Samantha at thechroniclesofhistoryblog@gmail.com or click our contact form below!  The Chronicles of History is looking to develop a writing team for the blog and I am looking for guest posters if any history writers are interested in having their work published and shared on our site! The blog mainly covers U.S History, Medieval History, Royal History, and both World Wars. We also share book reviews and short-stories! I am open to new topic suggestion and historical ideas that may interest readers, just let me know!

13 thoughts on “A Royal Murder ╽The Assassination Of Archduke Ferninand & His Wife, The Duchess!”