“Shells are exploding everywhere, and not far away, with short moments of calm; we take advantage to run… we return with hearts pounding to burrow into the trench. Each time a shell hisses by too low, I cling to the back of the cook’s helper, it makes me feel a little secure, and he turns around with a smile. The fact is that we’re all afraid.”

The invasion of Normandy occurred on June 6th, 1944 and was codenamed Operation Overlord. The Allied operation that launched the successful invasion of German-occupied Western Europe during World War II.

During the chaos, Marie Louise Osmont was present on scene because she lived on a chateau on the beach of Normandy. In June of 1944, occupying Germans had taken over Osmont’s home; however, she and her husband remained using a few rooms. So the Osmont were there on that critical day.

This gave her a crucial view of the coast designated for attack by the British forces – Sword Beach. Marie-Louis kept a diary of her experiences. In today’s post , I will be sharing a few of her entries detailing all she had seen in an incredible account of the landing as dawn broke that June morning. 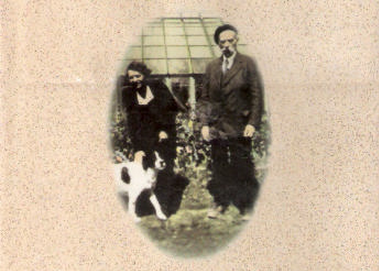 During the night of June 5-6, 1944, Marie-Louise’s sleep is disrupted by the sound of cannon fire and aircraft overhead. The commotion intensifies and the Germans start packing equipment into trucks in preparation of leaving the area. Confused, Marie-Louise is unsure whether the aircraft and gunfire are German or Allied. We join her story as dawn breaks on the 6th of June 1944.

“Little by little the gray dawn comes up., but this time around, from the intensity of the aircraft and the cannon an idea springs to mind: landing! I get dressed hurriedly. I cross the garden, the men recognize me. In one of the foxholes in front of the house, I recognize one of the young men from the office; he has headphones on his ears, the telephone being removed there. Airplanes, cannon right on the coast, almost on us.

I cross the road, run to the farm, come across Meltemps. ‘Well!’ I say, ‘Is this it, this time?’ ‘Yes,’ he says, ‘I think so, and I’m really afraid we’re in a sector that’s being attacked; that’s going to be something!’ We’re deafened by the airplanes, which make a never-ending round, very low; obviously what I thought were German airplanes are quite simply English ones, protecting the landing. Coming from the sea, a dense artificial cloud; its ominous and begins to be alarming; the first hiss over our heads.

I feel cold; I’m agitated. I go home, dress more warmly, close the doors; I go get Bernice [a neighbor] to get into the trench, a quick bowl of milk, and we run – just in time! The shells hiss and explode continually.

In the trench in the farmyard we find three or four Germans: Leo the cook, his helper, and two others, crouching, not proud except for Leo, who stays outside to watch). We ask them ‘Tommy come?” They say yes, with conviction. Morning in the trench, with overhead the hisses and whines that make you bend even lower. For fun Leo fires a rifle shot at a low-flying airplane, but the Spiess[the German Sergeant-Major] appears and chews him out horribly; this is not the time to attract attention.

Shells are exploding everywhere, and not far away, with short moments of calm; we take advantage to run and deal with the animals, and we return with hearts pounding to burrow into the trench. Each time a shell hisses by too low, I cling to the back of the cook’s helper, it makes me feel a little secure, and he turns around with a smile. The fact is that we’re all afraid.” 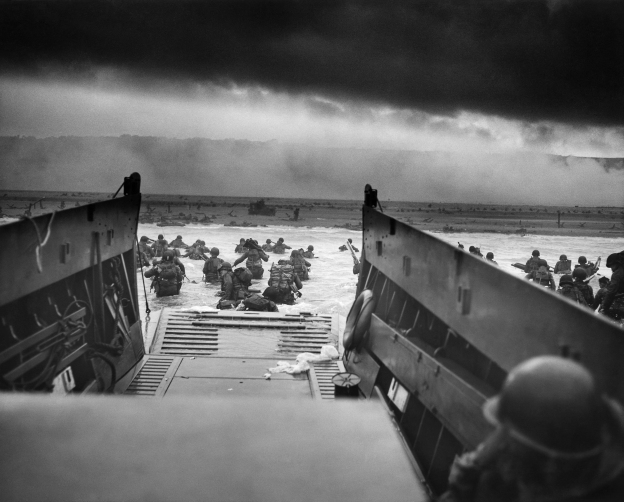 Later in the morning a lull in the shelling allows Marie-Louise and her neighbor to return to the farmhouse and prepare their lunch:

“Around noon a bit of a lull. We try to have lunch; I busy myself with the fire, Bernice with the soup and potatoes; it’s cooking. We start to seat ourselves around the table, two mouthfuls of soup, and then everything changes with tremendous speed. Someone – a Frenchman on the road, the soldiers at the gate – someone said: ‘The Tommies!’ We watch the soldiers. They hide on both sides, watching in the distance in panic, confusion painted on their faces. And we hear these words: ‘The tanks!’ A first burst of tracer bullets, very red, sweeps the gate; men crouch down. Bernice and I hide in a corner of the room. There’s banging in every direction.

We’re going to have to go somewhere else. Standing in our corner, we gulp a plate of soup, while the Spiess, who has been shouting orders, comes with his revolver in hand to see whether men are hiding with us. Everything starts happening. Evidently, they’re going to try to leave with their trucks. A German tank arrives and takes the Spiess away. The shells bang.” 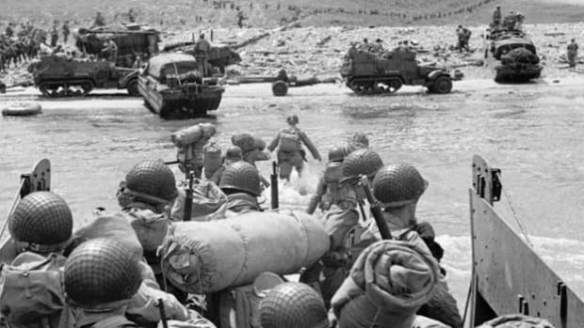 The continuing bombardment forces the Frenchwomen to flee the farmhouse for the relative safety of the trench. Around two o’clock in the afternoon the first British soldiers are spotted near the farm. The Germans hold their ground while the two women huddle in the trench:

“Around six o’clock a lull. We get out and go toward the house to care for the animals and get things to spend the night underground. And then we see the first damage. Branches of the big walnut broken, roof on the outbuildings heavily damaged, a big hole all the way up, a heap of roof tiles on the ground, a few windowpanes at my place – hundreds of slates blown off the chateau, walls cracked, shutters won’t close – but at Bernice’s it’s worse.

An airplane or tank shell has exploded on the paving in her kitchen at the corner of the stairs, and the whole interior of the room is devastated: the big clock, dishes, cooking equipment, walls, everything is riddled with holes, the dishes in broken pieces, as are almost all the windowpanes.

The dog Frick that I had shut up in the next room so he wouldn’t get killed on the road, is all right and sleeping on a seat. But we realize that if we had stayed there, we would both have been killed. In the face of this certainty, Bernice takes the disaster very well; we try to straighten up the unspeakable mess a little. Out of the question to eat the soup and mashed potatoes that have been prepared; everything is black with dust and full of shards of glass.

Someone gives us soup from the farm. We talk with them for a short while and note the Germans haven’t taken away all the trucks from the drive; there are also a lot of vehicles still in the park.”

Marie-Louise and Bernice inspect the rest of the house and step outside to find cows lying dead in the pasture. Meanwhile, the battle continues:

“The English tanks are silhouetted from time to time on the road above Periers. Grand impassioned exchanges on the road with the people from the farm; we are all stupefied by the suddenness of events. I take a few steps down the drive, toward the Deveraux house, and suddenly I see the replacement Speiss and his comrade hugging the wall of the pasture.

I tell him that he must still have comrades at the guns, since we can still hear the battery firing. You feel that these two men are lost, disorientated, sad. Later, almost night, I see them again, their faces deliberately blackened with charcoal, crossing the park. What will be their fate? How many of them are still in the area, hiding and watching?” 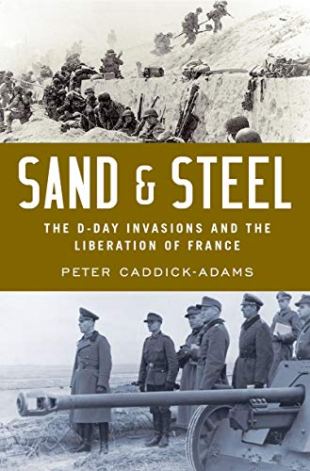 Peter Caddick-Adams’s account of the Allied invasion of France in June 1944 matches the monumental achievement of his book on the Battle of the Bulge, Snow and Steel, which Richard Overy has called the “standard history of this climactic confrontation in the West.” Sand and Steel gives us D-Day, arguably the greatest and most consequential military operation of modern times, beginning with the years of painstaking and costly preparation, through to the pitched battles fought along France’s northern coast, from Omaha Beach to the Falaise and the push east to Strasbourg.

In addition to covering the build-up to the invasion, including the elaborate and lavish campaigns to deceive Germans as to where and when the invasion would take place, Caddick-Adams gives a full and detailed account of the German preparations: the formidable Atlantikwall and Field Marshal Erwin Rommel’s plans to make Europe impregnable-plans not completed by June 6. Sand and Steel reveals precisely what lay in wait for the Allies. But the heart of the book is Caddick-Adams’ narratives of the five beaches where the terrible drama played out–Utah, Omaha, Gold, Juno, and Sword, and the attempt by American, British, and Canadian soldiers to gain a foothold in Europe.

The Allied invasion of Europe involved mind-boggling logistics, including orchestrating the largest flotilla of ships ever assembled. Its strategic and psychological demands stretched the Allies to their limits, testing the strengths of the bonds of Anglo-American leadership. Drawing on first-hand battlefield research, personal testimony and interviews, and a commanding grasp of all the archives and literature, Caddick-Adams’s gripping book, published on the 75th anniversary of the events, does Operations Overlord and Neptune full justice.

3 thoughts on “Invasion of Normandy [1944]: Marie-Louise Osmont Witnesses Everything!”