In the summer of 1914, The U.S implemented a volunteer ambulance service in France at the beginning of WWI. The goal was to assist those injured outside of Paris in an American hospital. German troops had been storming France all summer long and those being wounded on the front lines needed transportation to receive medical care.

In today’s post we will be following the experiences of British poet John Masefield who served in the American Ambulance Field Service. At this point, the U.S had not entered the war; however, Over two-thousand volunteers operated on various fronts throughout France, Italy, Greece, Serbia, and Albania. Their task was simply to drive the injured to safety for medical care. These volunteers were college students, poets, and writers. The famous author Ernest Hemingway being among them serving as an ambulance driver. He used the experience as the basis of his novel A Farewell to Arms. The volunteers were expected to pay for their transportation to Europe and for their meals while there. The American Ambulance Field Service operated as an independent volunteer agency until America’s entrance into the war in 1917 when it was absorbed by the American Army. 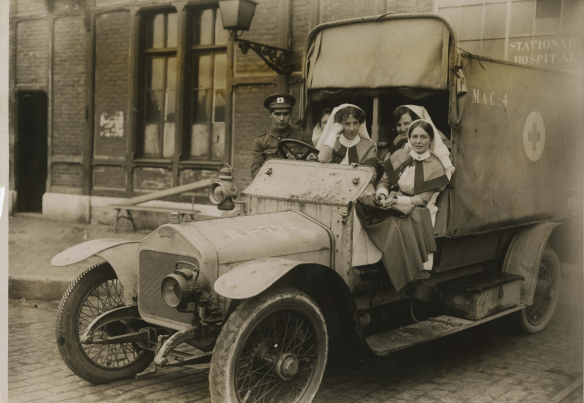 British poet John Masefield served in the American Ambulance Field Service. He describes his experience as darkness descends on the Front allowing the ambulance drivers to take to the roads in relative safety from enemy fire.

We join his story as his ambulance nears the Front:

“In this open space the drivers can see for some miles over the battlefield. Over it all, as far as the eye can see, the lights are rising and falling. There is not much noise, but a sort of mutter of battle with explosions now and then. Very far away, perhaps ten miles away, there is fighting, for in that quarter the sky glimmers as though with summer lightning; the winks and flashes of the guns shake and die across the heaven.

One side of the road is here screened with burlap stretched upon posts for half a mile together; otherwise daytime traffic on it would be seen by the enemy. Some of the burlap is in rags and some of the posts are broken; the wreck of a cart lies beside the road, and in the road itself are roundish patches of new stones where shell-holes have been mended, perhaps a few minutes before.

Just overhead as the car passes comes a blasting, shattering crash which is like sudden death. Then another and another follow, one on the other, right overhead. On the ground above, the slope of the little hill, a battery of soixante-quinze guns has just opened fire. On the tail of each crash comes the crying of the shell, passing overhead like a screech-owl, till it is far away in the enemy lines, where it bursts. Another round follows, but by this time the ambulance is a hundred yards away, and now, on the heels of the affront, comes the answer. Rather to the right and very near in the stillness of the moonlight an enemy battery replies, one, two, three guns in as many seconds, a fourth gun a little late, and the shells come with a scream across and burst behind the ambulances, somewhere near the battery. Then a starlight goes up near enough to dazzle the eyes, and near enough, one would think, to show the ambulance to the world; and as the starlight goes down a second round comes from the battery aimed God knows at what, but so as to arroser the district. The noise of the engine stifles the noise of the shells, but above the engines one shell’s noise is heard; the screech of its rush comes very near, there is a flash ahead, a burst, and the patter of falling fragments. Long afterward, perhaps six seconds afterward, a tiny piece of shell drops upon the ambulance. Another shell bursts behind the car, and another on the road in front; the car goes round the new shell-hole and passes on.

This is ‘the front.’ Two hundred and fifty yards away, a seventh part of a mile, two minutes’ walk, are the enemy lines. Dead ahead, in what looks like a big rubbish-heap, such as one may see in suburbs where builders have been putting up a row of villas, is the Poste de Secours. The rubbish-heap was once a farm, though no man, not even the farmer, could now say where his buildings lay.

The drivers go down the sloping path into the cellars. The cellar roof has been propped and heaped with layers of timber balks interspersed with sand-bags, and the cellar itself, shored up, is like a mine. It is a vast place with several rooms in it, from one of which, strongly lighted, comes the sound of voices and of people moving. Looking round near at hand, as the eye becomes accustomed to the darkness, one sees some loaded stretchers on the floor near the doorway. Three dead men, who were alive an hour ago, lie there awaiting burial. They were all hit by one torpedo, says the stretcher-bearer, these and five others, but these three died on their way to the Poste. Some say that the dead look as though they were asleep, but no sleep ever looked like death.

Presently the sick arrive, haggard and white, but able to walk, and the gathering breaks up and the ambulances are free to go. The moon is blotted by this time; it is darker and beginning to rain, the men say. On leaving the operating-room, one hears again as a real thing the scream of the rush of the big shells, the thump of the bursts, and the crash of the great guns. The stretchers are passed into the ambulances, the sick are helped on to seats, they are covered with blankets, and the doors are closed. It is much darker now and the rain has already made the ground sticky; and with the rain the smell of corruption has become heavier, and the ruin is like what it is-a graveyard laid bare. Shells from the enemy rush overhead and burst in a village which lies on the road home. They are strafing the village; the cars have a fair chance of being blown to pieces; it is as dark as pitch and the road will be full of new shell-holes. The drivers start their engines and turn the cars for home; the rain drives in their faces as they go, and along the road in front of them the shells flash at intervals, lighting the tree-stumps.

These drivers (there are now, and have been, some hundreds of them) are men of education. They are the very pick and flower of American life, some of them professional men, but the greater number of them young men on the threshold of life, lads just down from college or in their last student years. All life lies before them in their own country, but they have put that aside for an idea, and have come to help France in her hour of need. Two of them have died and many of them have been maimed for France, and all live a life of danger and risk death nightly. To this company of splendid and gentle and chivalrous Americans be all thanks and greetings from the friends and allies of sacred France.”

A World War II memoir following the adventures of a female ambulance driver as she serves across four fronts witnesses the best and worst of humanity, and navigates the barriers imposed by sexism in the British Army.

Train to Nowhere is a war memoir seen through the sardonic eyes of Anita Leslie, a funny and vivacious young woman who reports on her experiences with a dry humor, finding the absurd alongside the tragic.

Daughter of a Baronet and first cousin once removed of Winston Churchill, Anita joined the Mechanized Transport Corps as a fully trained mechanic and ambulance driver during WWII, serving in Libya, Syria, Palestine, Italy, France, and Germany. Ahead of her time, Anita bemoans “first-rate women subordinate to second-rate men,” and, since the English army forbade women from serving at the front, joined the Free French Forces in order to do what she felt was her duty.

Writing letters in Hitler’s recently vacated office and marching in the Victory parade contrast with observations of watching friends murdered and a mother avenging her son by coldly shooting a prisoner of war. Unflinching and unsentimental, Train to Nowhere is a memoir of Anita’s war, one that, long after it was written, remains poignant and relevant.

CLICK HERE TO GET A COPY OF THE BOOK