Starz once again continues to make my royal history loving heart beyond happy. They are just excellent with putting out amazing shows. Fans first got The White Queen, The White Princess, The Spanish Princess, Becoming Elizabeth… Now they are presenting us with The Serpent Queen airing in September!

The show will be a fictional drama based on the very infamous life of Catherine De Medici! She was an Italian noblewoman who would be Queen of France from 1547 until 1559 through her marriage to King Henry II. She was mother to three French kings: Francis II, Charles IX and Henry III.

I am so excited for what Starz does with this. The show creation will be from the novel Catherine de Medici: Renaissance Queen of France by Leonie Frieda and I don’t think a better selection could have been chosen! 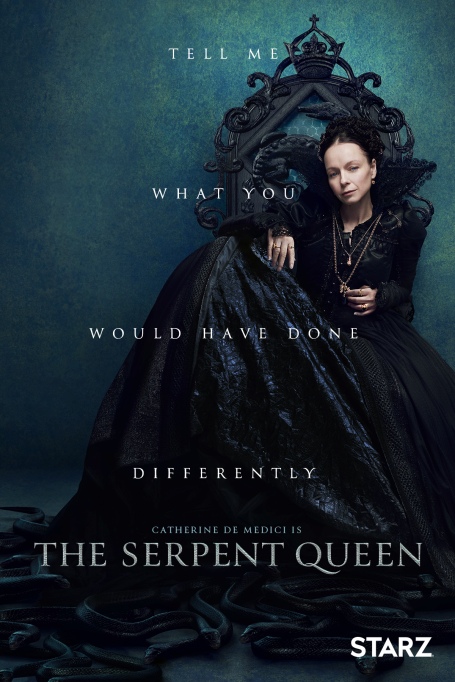 So lets get this started by providing all the details everyone is going to need in order to watch this very promising show. The first episode will be airing on September 11th, 2022 on the Starz network. I highly recommend a Starz streaming subscription especially if you want to catch up on their other royal dramas! I believe I currently pay $5 dollars a month for access.

Description: A gripping historical drama with an edge, “The Serpent Queen” puts a contemporary spin on conventional storytelling to tell the tale of Catherine de Medici’s unconventional rise to power. Catherine’s harrowing tale unfolds through flashbacks as she defends her nefarious actions and imparts the lessons she’s learned to her new servant and confident, Rahima.

At fourteen years old, the young, orphaned Catherine marries into the 16th-century French court. Despite her commoner status, her uncle Pope Clement has negotiated a massive dowry and a geopolitical alliance in return for the union, and with it comes the expectation of many heirs. However, on her wedding night, Catherine learns that her new husband is in love with Diane de Poitiers, a beautiful lady-in-waiting twice his age.

With her future suddenly uncertain and with little hope of conceiving any heirs, Catherine must quickly learn who she can trust – both within her personal entourage of courtiers and the members of the royal court – while outmaneuvering those who underestimates her determination to survive at any cost. Catherine will crush those who dare to stand in the way. 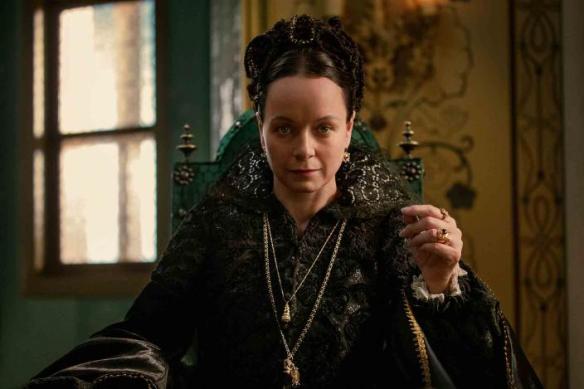 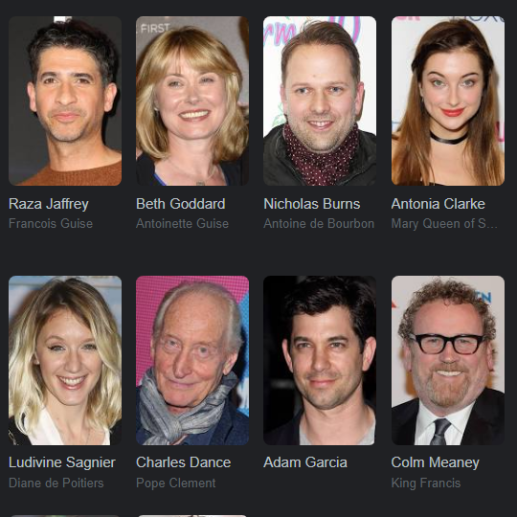 Starz released the first trailer of The Serpent Queen and I am all here for it! The storyline seems really intriguing with Catherine telling her own story of when she was a young girl and everything she endures and goes through.

I’ve read book where the main character is older and telling another person of the past. This style of story telling has actually become one of my favorite types. There are many examples of where this is so well done such as Wuthering Heights and The Notebook. I honestly have very high hopes that The Serpent Queen will be an entertaining and enjoyable show to watch!

I hope this little sneak peak into this new up and coming show is just the thing everyone is looking to watch on Sunday nights now that Becoming Elizabeth season one has finished airing for the time being. Fans definitely need a new queen to love! Is Queen Catherine the one to win our hearts?

Below is the trailer:

Prepare for a royal drama unlike any that you’ve seen before on TV. In The Serpent Queen, Samantha Morton takes on Catherine de Medici, one of the most powerful and longest-serving rulers in French history. And based on ET’s exclusive first look at the trailer, she gives zero f**ks as she recounts how she came to reign over France from 1547 until 1559.

Adapted from the biography Catherine de Medici: Renaissance Queen of France by Leonie Frieda, The Serpent Queen is a historical drama with a serious edge as executive producer Justin Haythe turns the genre on its head by giving the conventional royal storytelling a fresh and contemporary spin.

Morton, a two-time Oscar nominee and Walking Dead fan-favorite, takes on the nefarious ruler as the series looks back on her rise to power and dispatches various lessons learned to her confidant Rahima (Sennia Nanua).

“My story begins when I was a young girl,” Morton is heard saying as the trailer cuts back and forth in time to show a young Catherine (portrayed by Liv Hill) on her way to becoming queen and the various ups and downs she experienced along the way before the actress shoves an entire tray off a table. “You know what I learnt that day? Never to trust a single soul.”

“A beautifully written portrait of a ruthless, subtle and fearless woman fighting for survival and power in a world of gangsterish brutality, routine assassination and religious mania. . . . Frieda has brought a largely forgotten heroine-villainess and a whole sumptuously vicious era back to life. . . . This is The Godfather meets Elizabeth.” —Simon Sebag Montefiore.

Based on research including thousands of Catherine’s own letters, Frieda unfurls Catherine’s story from her troubled childhood in Florence to her tumultuous marriage to Henry II of France; her transformation of French culture to her reign as a queen who would use brutality to ensure her children’s birthright. Brilliantly executed, this enthralling biography goes beyond myth to paint a very human portrait of this remarkable figure.