Sybil Ludington was a simple colonial women living just outside of New York in 1776 during the American Revolution in rural Dutchess county. She was the eldest child of commander Henry Ludington. Sybil’s father belonged to the Dutchess County militia.

In a moment’s notice with one decisive action the young sixteen-year-old girl would show her worth and save lives. Sybil Ludington has often been compared to Paul Revere because the two each managed to ride swiftly and provide warning of the incoming British Army during the revolutionary war for independence. Sybil’s story is quite remarkable considering that she was a girl and made the long forty-mile journey in the middle of the night all alone without any protection. She had no escort or anyone there to assist her there was any trouble traveling such a long distance. In a letter posted below to John Adams in 1829, Sybil describes the night in question and provides her perspective of the events that led to him asking her to be in a pamphlet honoring war heroes. It is a rather interesting read and shows quite a humility on Sybil’s part.

Sybil Ludington was born on April 5th, 1761 to Henry Ludington and Abigail Knowles just outside of New York in Fredericksburg. She was the first of twelve children the couple would have and was conceived within the first year of their marriage. Sybil grew up on her family’s farm in Dutchess County. By all accounts life was a comfortable and prosperous one for the large Ludington family. They were your normal class of American Colonials.

Henry Ludington owned around two-hundred and twenty-two acres of land that allowed for farming. He also owned a mill in Patterson, New York, which put him right in the community as a prominent leading voice. Henry was quick to join the militia and support the efforts against the British during the American Revolutionary War.

The story is a fairly simple one. A messenger arrived at the home of the Ludingtons with devastating news. The British Army were burning down the nearby town of Danbury. The militia had a duty to rally the troops and prepare to defend themselves against the enemy; however, someone would be needed to alert all the men who belonged to the militia. This would require a rider able to go to the men scattered all around in different homes. Henry’s sixteen-year-old daughter was nominated for the task.  It is unclear if others suggest she be the one, if she volunteered to go, or if Henry’s specifically asked her in a time of need. She was to take a horse to ride as quickly as possible and alert everyone about the downfall of Danbury. This is almost unfathomable for the time. She was only a young girl, and it was very late in the evening when the messenger arrived with news.

To makes matters worse, it is reported that Sybil Ludington rode through the towns of Mahopac, Stormville, and Carmel on in a massive rainstorm on a man’s saddle too large for her small size. The midnight ride has been estimated to have been close to forty miles on severely rugged terrain for the majority of Sybil’s long journey. The roads were dangerous due to the wet mud created by the rainy night. She somehow managed to alert everyone and got the militia to meet at her father’s house by daybreak. They were unfortunately unable to save their supplies though from the British and but eventually they would push the enemy troops back on their boats in the Battle of Ridgefield on April 27th, 1777.

The following is a book excerpt from a biography on the life of Sybil’s father  Henry Ludington written by Johnson Willis Fletcher, 1857-1931.The biography is titled Colonel Henry Ludington : A Memoir and describes Sybil’s late night ride. It is very interesting take on how the events unfolded one Saturday evening on April 26th, 1777.

It was on Friday afternoon that the landing was made at Compo, and it was on Saturday afternoon that Danbury was burned. Patriot messengers rode at top speed in three directions toward New Haven to hasten Generals Arnold and Wooster, who were already on their way; to meet General Silliman, to expedite his juncture with the others; and to Fredericksburgh to tell the news to Colonel Ludington, that he might furnish the troops which the generals would need. Railroads, telegraphs and other annihilators of time and space were unknown in those days. But the personal factor, which after all dominates all the problems of this world, was active and effective.

At four o clock Danbury was fired. At eight or nine o clock that evening a jaded horseman reached Colonel Ludington s home with the news. We may
imagine the fire that flashed through the veteran s veins at the report of the dastardly act of his former chief. But what to do? His regiment was disbanded, its members scattered at their homes, many at considerable distances. He must stay there, to
muster all who came in. The messenger from Danbury could ride no more, and there was no neighbor within call. In this emergency he turned to his daughter Sibyl, who, a few days before, had passed her sixteenth birthday, and bade her to take a horse,
ride for the men, and tell them to be at his house by daybreak. One who even now rides from Carmel to Cold Spring will find rugged and dangerous roads, with lonely stretches.

Imagination only can picture what it was a century and a quarter ago, on a dark
night, with reckless bands of Cowboys and Skinners; abroad in the land. But the child performed her task, clinging to a man s saddle, and guiding her
steed with only a hempen halter, as she rode through the night, bearing the news of the sack of Danbury. There is no extravagance in comparing her ride with that of Paul Revere and its midnight message. Nor was her errand less efficient than his. By daybreak, thanks to her daring, nearly the whole regiment was mustered before her father s house at Fredericksburgh, and an hour or two later was on the march for vengeance on the raiders. They were a motley company, some without arms, some half dressed, but all filled with a certain berserk rage. 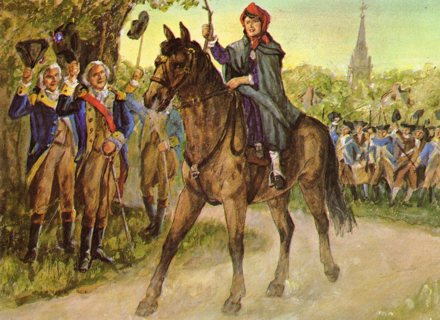 The following is Sybil’s letter written to John Adams obtained from the Sybil Ludington Museum Letter at https://paulsolarz.weebly.com/rachel/sybil-ludington-museum-letter

I was requested to send you a letter as I heard they were going to make a pamphlet informing others about all the heroes that helped us become a free country. I am flattered that you have asked me of this great task and I am happy to help. I believe that if you were a patriot then you greatly helped us become a free country, but this sounds like a great idea. If you have any concerns please contact me.

First of all I am Sybil Ludington daughter of Henry Ludington.

At about nine o’clock at night on the twenty sixth of April in seventeen seventy seven I rode through several towns alerting everyone about the British attack, telling them to get ready. With my prized stick I knocked on doors and even defended myself from a highwayman. I rode through Carmel then onto Mahopac, then to Kent Cliffs, from there to Farmers Mills and back home. I rode to warn the Patriot militia, and the farmers that the British attack is coming. At the time I was only sixteen. There were many dangers and close calls, I hid behind trees and waited until the marching British soldiers passed. It was scary yet exciting and an amazing ride for sure.

If I had to pick some things that are important to me it would probably be the stick that I became well known with, and my horse Star. Also maybe the lovely American Flag that we Americans proudly represent. At sixteen my mother expected me to be responsible and to act lady-like but; I wanted to be in the militia because I was tired of being ruled by Great Britain. Just like everyone else, I wanted to be free and independent. I hope I gave you enough information. Thank you again John Adams and anyone else who is behind this.

Sybil Rides tells the inspiring true story of events during the American Revolution which resulted in sixteen-year old Sybil Ludington becoming known as the Female Paul Revere. Her ride took place during an event in American History designed by the British commanders to bring an end to the Revolutionary War.

On a cold rainy night in the spring of 1777,  the British Regular Army, along with some Loyalists, attacked and burned Danbury, Connecticut. That raid was part of Lord William Howe’s plan to end the Revolution. During the raid a messenger was sent to the home of Colonel Henry Ludington asking for help. The Colonel’s sixteen-year old daughter, Sybil, bravely rode forty miles on that cold rainy night throughout the Hudson Valley to call the Militia to action.