Thomas Jefferson was one of the authors of the declaration of independence, a founding father, and later a president of the United States of America; however, before all of that he was a husband and a father. In today’s post we are going to be sharing some letters he wrote to his eleven year old daughter Martha (Patsy) after the death of his wife.

Thomas Jefferson’s wife Martha died at the age of thirty-three on September 6, 1782 just months after giving birth to the couple’s sixth child. This left a grief stricken and extremely depressed Jefferson with an enormous responsibility of raising their children.

Martha had made Jefferson promise to never remarry before her death because she didn’t want her children to ever have to deal with a step-mother, something many historians attribute to the troubled relationship she had with the multiple marriage of her father and her own step-mothers while she was growing up after her own mother’s death. Martha Jefferson found her numerous pregnancies a difficult burden among other health issues such a having diabetes and suffering from smallpox previously. This caused her to have poor health and unable to keep up managing Jefferson’s household at Monticello.

1781 had been an extremely trying year for Martha Jefferson starting with the stress and horror of having to flee Richmond from a British invasion in January and the a raid and attack on Monticello June of that year. According to white house archives “The physical strain of frequent pregnancies weakened Martha Jefferson so gravely that her husband curtailed his political activities to stay near her. He served in Virginia’s House of Delegates and as governor, but he refused an appointment by the Continental Congress as a commissioner to France. Just after New Year’s Day, 1781, a British invasion forced Martha to flee the capital in Richmond with a baby girl a few weeks old–who died in April. In June the family barely escaped an enemy raid on Monticello. She bore another daughter the following May, and never regained a fair measure of strength. Jefferson wrote on May 20 that her condition was dangerous. After months of tending her devotedly, he noted in his account book for September 6, “My dear wife died this day at 11:45 A.M.”

Shortly after his wife’s death, Jefferson’s duties as a member of the Continental Congress required that he leave Monticello and that he entrust the care of his three living children – Martha (Patsy), Mary and Lucy – to others. In November of 1783 the Continental Congress was meeting in Annapolis, MD. Jefferson took time out from his duties to write to his oldest daughter – eleven-year-old Patty – who had been left in the care of Mrs. Thomas Hopkinson, the mother of a friend.

Much has changed since the time that Jefferson wrote to his young daughter – our world would be as foreign to him as his would be to us. However, Jefferson’s letters reveal that the trials and tribulations of parenthood remain a constant through the passage of time.

After four days’ journey, I arrived here without any accident, and in as good health as when I left Philadelphia. The conviction that you would be more improved in the situation I have placed you than if still with me, has solaced me on my parting with you, which my love for you had rendered a difficult thing. The acquirements which I hope you will make under the tutors I have provided for you will render you more worthy of my love; and if they cannot increase it, they will prevent its diminution.

Consider the good lady who has taken you under her roof. . . as your mother, as the only person to whom, since the loss with which heaven has been pleased to afflict you, you can now look up.

With respect to the distribution of your time, the following is what I should approve:
From 8. to 10. o’clock practise music.
From 10. to 1. dance one day and draw another.
From 1. to 2. draw on the day you dance, and write a letter next day.
From 3. to 4. read French.
From 4. to 5. exercise yourself in music.
From 5. till bedtime, read English, write, &c.

..I expect you will write me by every post. Inform me what books you read, what tunes you learn, and inclose me your best copy of every lesson in drawing. Write also one letter a week either to your Aunt Eppes, your Aunt Skipworth, your Aunt Carr, or the little lady from whom I now enclose a letter. . . . Take care that you never spell a word wrong. Always before you write a word, consider how it is spelt, and, if you do not remember it, turn to a dictionary. It produces great praise to a lady to spell well…

If you love me, then strive to be good under every situation and to all living creatures, and to acquire those accomplishments which I have put in your power, and which will go far towards ensuring you the warmest love of your affectionate father,

P. S. – keep my letters and read them at times, that you may always have present in your mind those things which will endear you to me.

I hoped before this to have received letters from you regularly and weekly by the post, and also to have had a letter to forward from you to one of your aunts as I desired in my letter of Nov. 28th. I am afraid you do not comply with my desires expressed in that letter. Your not writing to me every week is one instance, and your having never sent me any of your copies of Mr. Simitiere’s drawing lessons is another. I shall be very much mortified and disappointed if you become inattentive to my wishes and particularly to the directions of that letter which I meant for your principal guide.

I omitted in that letter to advise you on the subject of dress, which I know you are a little apt to neglect. I do not wish you to be gayly clothed at this time of life, but that your wear should be fine of its kind. But above all things and at all times let your clothes be neat, whole, and properly put on. Do not fancy you must wear them till the dirt is visible to the eye. . .. Some ladies think they may. . . be loose and negligent of their dress in the morning. But be you, from the moment you rise till you go to bed, as cleanly and properly dressed as at the hours of dinner or tea.

A lady who has been seen as a sloven. . . in the morning, will never efface the impression she has made, with all the dress and pageantry she can afterwards involve herself in. Nothing is so disgusting to men as a want of cleanliness and delicacy in women. I hope, therefore, the moment you rise from bed, your first work will be to dress yourself in such style, as that you may be seen by any gentleman without his being able to discover a pin amiss, or any other circumstance of neatness wanting…

Present my compliments to . . . Mrs. Hopkinson whose health and happiness I have much at heart. I hope you are obedient and respectful to her in every circumstance and that your manners will be such as to engage her affections. I am my Dear Patsy, yours sincerely & affectionately, 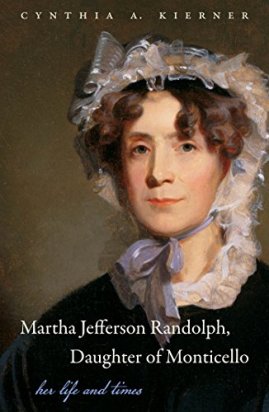 As the oldest and favorite daughter of Thomas Jefferson, Martha “Patsy” Jefferson Randolph (1772-1836) was extremely well educated, traveled in the circles of presidents and aristocrats, and was known on two continents for her particular grace and sincerity. Yet, as mistress of a large household, she was not spared the tedium, frustration, and great sorrow that most women of her time faced. Though Patsy’s name is familiar because of her famous father, Cynthia Kierner is the first historian to place Patsy at the center of her own story, taking readers into the largely ignored private spaces of the founding era. Randolph’s life story reveals the privileges and limits of celebrity and shows that women were able to venture beyond their domestic roles in surprising ways.

Following her mother’s death, Patsy lived in Paris with her father and later served as hostess at the President’s House and at Monticello. Her marriage to Thomas Mann Randolph, a member of Congress and governor of Virginia, was often troubled. She and her eleven children lived mostly at Monticello, greeting famous guests and debating issues ranging from a woman’s place to slavery, religion, and democracy. And later, after her family’s financial ruin, Patsy became a fixture in Washington society during Andrew Jackson’s presidency. In this extraordinary biography, Kierner offers a unique look at American history from the perspective of this intelligent, tactfully assertive woman.

8 thoughts on “Even Thomas Jefferson Struggled As A Father! Letters To Eleven Year Old “Patsy””