The story begins on a bloody battlefield one cold foggy morning in October. A huge battle rages all around in a small place called Germantown. Men by the thousands are engaged in the fighting. Chaos is everywhere among the muskets and canons. Washington has eleven-thousand men against the British’s nine-thousand soldiers. A little dog is lost in the aftermath…

George Washington is a prominent figure remembered for the numerous things he accomplished throughout his life. In today’s post, I wanted to bring back out a story about Washington in honor of President’s Day.

He is a founding father that led the U. S through a revolutionary war which would eventually allow the American colonies to gain independence from Britain. Washington was commander of the continental army and is normally considered the first president of the United States of America.

The inexperienced military leader was unexpectedly well suited as a soldier despite being a flawed tactician and complicated human. He secured necessary victories at Yorktown which would ultimately win the war.

In the summer of 1777, General William Howe of the British Army began to turn his on eye onto Philadelphia. The city was a vital strategic target because this was the central location for Washington and his forces.

The invasion was a success that allowed British to take control of the city.

The loss of Philadelphia had occurred right before other major defeats in September of 1777. It was a crushing blow for those seeking independence. It wasn’t their last failure either. Washington needed redemption.

General Howe at this time had begun splitting forces in October as the season begun getting colder. Here was George Washington chance. He wanted an opportunity to raise the spirits of his men and achieve a victory.

The odds were good and he saw an opportunity with British forces being spread out. He sent his men to Germantown to attack those stationed at the Garrison in hopes of gaining control. It did not work. Defeat yet again.

This ensured that Philadelphia remained in British hands for the entire remainder of the war.  It was quite a disheartening loss for the rebel patriots; however, encouragement and pride can be taken from what happens next.

A lost little dog was found roaming the battlefield in the aftermath by American soldiers. The creature is clearly lost and without their owner. This was not uncommon as dogs often followed their masters into battle.

Washington was very fond of dogs and brought a couple of them to battle himself while he traveled with his army. On this day in October, the lost dog was a terrier and no ordinary dog. He belonged to someone surprising.

On the collar was the name of its master. Can you guess who?

General William Howe was listed on the dog’s collar tag. The soldiers were feeling rather discouraged due to the constant defeats they had been suffering at the time. They had wanted to keep the pet as a war trophy.

George Washington though according to many sources had taken the animal into his tent where the dog would be kept safe. He had the dog sheltered, fed, groomed, and taken care of. A short time later, he ordered his army to return the dog to General Howe under a flag of truce.

Washington had his aide-de-camp, Alexander Hamilton, a military officer who acted as his confidential assistant write Howe a note that read:

“General Washington’s compliments to General Howe. He does himself the pleasure to return [to] him a dog, which accidentally fell into his hands, and by the inscription on the collar appears to belong to General Howe.”

Reflecting on the story of General Howe’s lost dog brings an interesting aspect to the revolution and war in general. it humanizes the men that were there. They were just regular people fighting for what they believed in.

This story shows the kinder side of human nature in a time when cruelty prevailed and humanity was sorely lacking. Compassion is everything.

They could have kept General Howe’s pet. It was interesting of Washington to not resort to petty behavior over the lost battle. This story shows that the man had plenty of decorum even during wartime.

Please comment below if you know any more facts about this incident, have opinions, or anything you would like to add.

What do you think of George Washington himself?

Book Of The Day 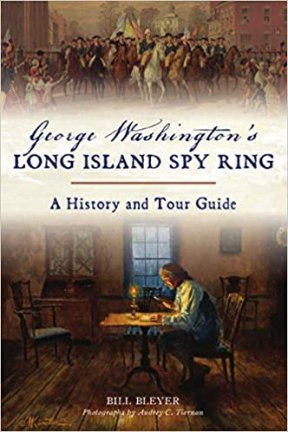 In 1778, two years after the British forced the Continental Army out of New York City, George Washington and his subordinates organized a secret spy network to gather intelligence in Manhattan and Long Island. Known today as the “Culper Spy Ring,” Patriots like Abraham Woodhull and Robert Townsend risked their lives to report on British military operations in the region.

Vital reports clandestinely traveled from New York City across the East River to Setauket and were rowed on whaleboats across the Long Island Sound to the Connecticut shore. Using ciphers, codes and invisible ink, the spy ring exposed British plans to attack French forces at Newport and a plot to counterfeit American currency.